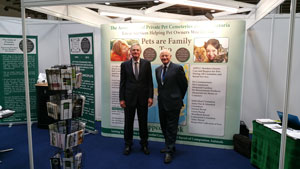 The animal and human funerals sectors are drawing ever closer, as demonstrated when hordes of visitors – including many vicars – descended on a stand manned by pet crematorium operators at a prestigious UK exhibition.

The clergymen were fascinated to hear of the work carried out by members of the Association of Private Pet Cemeteries and Crematoria (APPCC) when they visited the National Funeral Exhibition.

The operators hoped to raise their profile to put them on an equal footing with funeral directors and to get away from being unfairly lumped in the same category as waste removal contractors.

A banner proclaiming ‘pets are family too’ summed up the APPCC’s central message at the show.

The main objectives were to underline the strict standards enforced on APPCC members and to encourage undertakers to provide pet services via the association’s Pet Funeral Arranger scheme.

Nick Ricketts, APPCC chairman, said both aims were achieved with a steady stream of visitors to its display over the three days of the event at Stoneleigh Park in Warwickshire.

“The APPCC recently introduced independent inspections for our members to offer even more assurance to animal lovers,” he said.

“Inspections need to be independent and they need to be vigorous if they are to be meaningful – I can tell you from a personal point of view they are also unnerving!

“We believe this is one of the most significant developments to ever be announced in the pet funeral industry. If they pass these inspections our members can truly stand out from the crowd.”

APPCC crematoriums are often tarred with the same brush as operators whose methods can be best described as pure ‘waste disposal.’

“Sadly this misconception has not been helped by several alarming cases reported in the media involving non APPCC members,” said Mr Ricketts.

“Typically stories often involve people being given the wrong ashes back or being horrified to discover that their treasured pet had a terribly undignified send-off.

“Animals are hugely important members of the family and the public can expect the same level of professionalism, care and dignity normally associated with the human funeral industry. That is what sets the APPCC apart.”

Mr Ricketts added: “Being at an exhibition associated solely with the human funeral sector just shows how far we have come.”

He added: “We were very pleasantly surprised to be visited at the stand by at least a dozen Church of England clergy. They were attending a conference nearby and had been bussed down to have half a day at the show. None of them knew anything about pet bereavement services, but we soon changed that!”

The APPCC is the only European organisation setting standards for pet cemeteries, crematoria and pet cremation that protect the pet owner and ensure their pet is handled in the way they expect.